I've taken a break from unpacking boxes to immerse myself in the revisions which arrived in my inbox on Friday. As suspected, they're numerous and mainly focus on that tricky little sucker: strong emotional conflict.

At the moment there isn't much development of the stuff, and I haven't made the most of the themes that I've introduced. I'm relying too much on external pressures, and my characters are bickering when they should be getting to know each other. Annoyingly enough, some of the scenes I altered as being too coincidental might turn out not to have been, and my original beginning probably is the right place to start. If I'd gone with my gut instinct instead of overthinking things and endlessly fiddling around, I suspect I could have saved myself a whole lot of trouble.

I think/hope that some of this can be solved by restructuring. The rest needs to be rewritten. Ugh. Still, daunting though the amount of work I have to do is, it's kind of exciting as I know the story will be much better for it. Let's just hope the baby (due in ten days) stays where it is for a while!
Posted by Lucy King at 7:59 AM 8 comments:

The young hot royal went in on Tuesday, woohoo!! I suspect Matt and Laura's story will soon be winging its way back with reams of revisions, but at least it's in. To celebrate, I played hookey and spent Wednesday at the beach, coming home with what I like to call a healthy glow, but what others might call a touch of sunburn.

Now, ideas for the next book are hammering away - I'm thinking a world famous jewellry collection, a gemmologist, an ice-cool aristocrat and a batty old aunt with an online poker habit - but first I have to move house. Ugh.

Hope you all have a more glam weekend ahead!
Posted by Lucy King at 7:25 AM 9 comments: 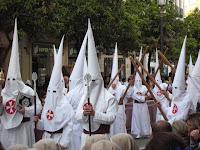 It's Semana Santa in my part of the world, which means pointy hats and pasos once again.

Of course I can't go and watch any of it as I'm head down at my desk tackling my young hot royal, so to speak, who now doesn't have to be in until Wednesday.