Apparently e-readers and the like are doing wonders for sales of Mills & Boons to thirty-somethings. Woohoo!
Posted by Lucy King at 4:05 PM 4 comments:

Big, big congratulations to fellow Modern Heat author, Kelly Hunter, who's a finalist in the Romance Writers of America RITA and Golden Heart awards for 2010 with Revealed: a Prince and a Pregnancy.

The winners will be announced at the RWA conference in July and am keeping all fingers and toes crossed (which does make typing tricky, but all for a good cause, I say).

Browse this book
Add to your site
Buy this book
Posted by Lucy King at 8:19 AM 2 comments:

Hooray! I think I've found a way around my rather coincidental beginning. Not only does the new opening scene provide a better reason for my main characters to meet, it has the added bonus of my hero putting in an appearance on page 1 instead of waiting until Chapter 2.

Even though I'm under no illusion that it's perfect - or won't change - after the traumas of the last couple of days (on Monday the 1000 words I'd written on Sunday mysteriously disappeared and yesterday my laptop with a morning's work on it suddenly died) this is a relief indeed!
Posted by Lucy King at 8:56 AM 9 comments:

Just popping up from a writing frenzy (during which I have to produce 15,000 more words and revise the lot before my April 1 deadline, gulp) to say a quick hello. Am rather worried the whole of Bk 3's story might hinge on a rather unlikely coincidence and that the hero doesn't have much of a conflict, but after the trauma of Bk 2 have decided to go with the flow and to try not to stress too much.

In the meantime, said Bk 2, Propositioned by the Billionaire, which is out in July and is up on Amazon, now has a cover! And here it is... 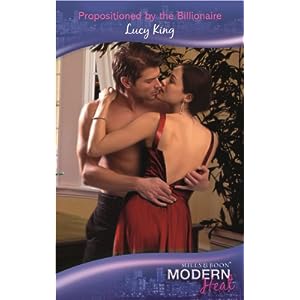 Much as I love Phoebe, I wish she'd get out of the way so we could all get a better look at that chest...
Posted by Lucy King at 8:23 PM 9 comments:

Bought: Damsel in Distress has had a lovely review and gets an A grade over at The Good, The Bad and The Unread. Am basking in a warm glow while trying to convince myself Bk 3 isn't as awful as I think it might be...
Posted by Lucy King at 8:17 AM 4 comments: